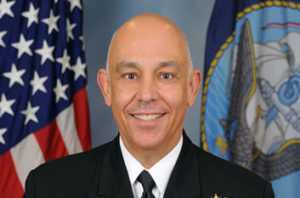 AWIBC is thrilled to gain the leadership of Rear Admiral Sam Perez (Retired) as well as the other distinguished members of the board,” said AWIBC Executive Director Joe Farren. “Illustrating the many ways in which amphibious warships are the most versatile and valuable ship in the Navy fleet will continue to be our job and having these accomplished leaders as part of the effort will only make us more impactful. I want to personally thank Terry McKnight for his exceptional leadership over the past several years and we look forward to continuing to leverage his experience and deep knowledge moving forward.”

Prior to retiring from active duty in the U.S. Navy in August 2016, RADM Perez (Ret.) served as the U.S. Navy’s 65th President of the Board of Inspection and Survey where he led a team of experts who assessed the material readiness of the fleet by performing comprehensive inspections on shipboard systems. He is a graduate of the United States Naval Academy and holds a Master’s Degree in Strategic Planning from the Naval Postgraduate School. Further, he was a Federal Executive Fellow at MIT and a Senior Navy Fellow at the Strategic Studies Group. RADM Perez (Ret.) is excited to get started in his new role as Chairman of AWIBC.

Since its creation in 2013, AWIBC has been committed to showcasing the value and importance of amphibious warships. As AWIBC enters the second half of 2019, it looks forward to working closely with its new executive leadership team to highlight the critical role these great ships – and the men and women who build them – play in protecting and enhancing our country.

To read more information about our new AWIBC Board members, please visit our “Leadership” page.